Reading: The Best Free Apps for a New iPhone
Back To Top

The Best Free Apps for a New iPhone

When I first got up new iPhone 5S (thanks to my parents), I instantly went to the app store and starting downloading apps! Having a smartphone and not using apps is like having a computer and only using it to browse the Internet. If you have an iPhone, you’re also lucky because the Apple app store is still better than the Android app store in terms of number of apps and quality of apps, in my opinion.

So what are the best free apps to download for your new iPhone right away? Well, there are a bunch! Obviously, everyone will have their preferences, so I’ll try to keep this list fairly general and useful for anyone. In addition, I won’t list many alternatives, just one or two at the most and normally the best ones.

I’ll also break it down by category, so if you’re looking for the best video app or chat app, you can skip down to the appropriate section. I’m not going to mention any games because the “best” game changes everyday and there are already enough lists online for finding good games. I’ll also not mention news apps and a couple of other categories that are pretty self-explanatory. 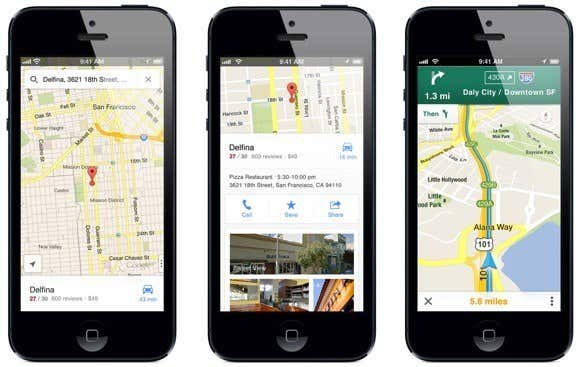 Google Maps – I pretty much use the GPS on my iPhone all the time when driving and it’s completely replaced the Garmin GPS I had used for years before. Apple Maps is pretty good now, but it’s still lags far behind Google Maps. Since it’s a Google product, you can log in using your Google account also and have all your data synced, which makes life a lot easier.

Waze – Waze is turn-by-turn navigation with the addition of a social community that helps brings in useful information for drivers. It has been acquired by Google, but it still a separate app. Eventually, it might be merged into Google Maps, which would make that app the only one you really need for GPS navigation! 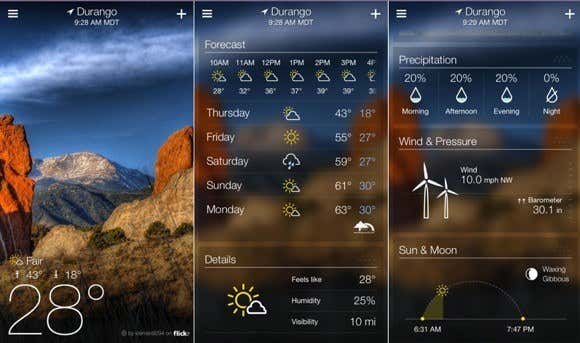 There are a million weather apps and it really comes down to preferences, so you may hate my list! If you really love something else, post in the comments.

Yahoo Weather – This is my favorite because it’s got a beautiful interface and pretty much all the information you need, unless you’re hardcore about weather, in which case you’ll probably be spending money on a fancy weather app. But for free, this is just perfect.

Weather Underground – A lot of people swear by this app and I’ve used it also and really liked it. It’s free, but it includes ads. That’s the only downside. You can pay 99 cents and get the ads removed, but we’re trying to only mention the best free apps. Regardless of the ads, it’s still an excellent weather app.

flickr – The flickr app lets you browse your Flickr photos and also lets you upload everything from your iPhone up to their free 1 TB storage account. If you take a lot of photos, this is a great option. It’s also got filters and editing tools, so you can fix up your photos before uploading to flickr, Twitter or Facebook.

Google+ – Google+ is mostly a social networking app, but I listed it under best camera/photo apps also because it is actually really great for photos. If you used Picasa Web Albums in the past, those have been converted into Google+ photo albums and you can access them all from the Google+ app. It also auto uploads all your photos and videos to Google+ and create animated GIFs, enhances photos and more for you automatically.

Instagram – It’s hard not to find a friend who isn’t using Instagram. Even though Facebook bought them, they are still one of the most popular photo sharing apps out there.

Snapseed – The above-mentioned apps are mostly related to photo viewing and storage, but Snapseed is good for photo effects. You can transform and adjust photos with the many options and tools this app includes all for free.

Photo Editor by Aviary – Another free app, but this one has in-app purchases if you want more effects than just the basic ones. The free version has a lot of features and more than enough to create some pretty cool edited photos.

VSCO Cam – Again, like the photo app by Aviary, you get a basic set of filters and can purchase more via in-app purchases. The program uses some advanced technology to add stunning effects to your photos. 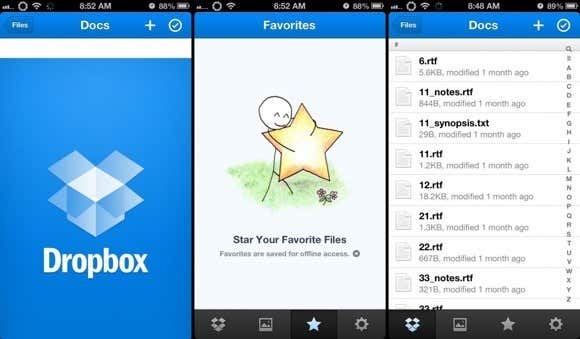 Dropbox – The most popular and widely known, Dropbox is pretty sweet for storing your files in the cloud. It works on pretty much every device and on the iPhone it’s amazing for uploading all your photos and videos automatically. Only downside? Expensive for storage. If you use a lot of data, you’ll be paying way more than the competitors.

Google Drive – My new favorite because of the huge price drop: $10 a month for 1 TB of storage. You only get 500 GB on Dropbox for $500 a year. My new plan is to move most data from Dropbox to Google Drive and then continue to use Dropbox, but only on the smaller less expensive plans. Google Drive can’t aut0-upload anything from your phone. Google+ can, but the two don’t currently integrate very well, something Google needs to do if they want to compete more with Dropbox.

OneDrive – Even though it’s from Microsoft, it’s a pretty good app. Just about everyone has a Windows PC, which makes this app actually useful. OneDrive is integrated into Office 2013, Windows 8, Windows Phone, Microsoft Surface and other Microsoft products, so if you are in the Microsoft world, this is a good cloud storage app. It’s also cheaper than Dropbox in terms of storage. 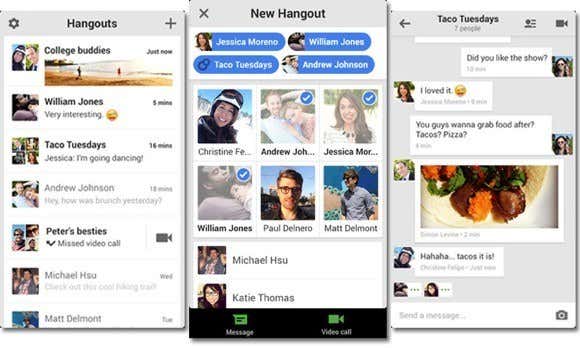 Google Hangouts – Hangouts is great for anyone who uses Gmail and other Google services. It lets you chat with your buddies and do video calls with groups of people. Not a very great chatting app if you really think about it, but since it’s Google, it’s useful.

WhatsApp – If Facebook paid $16 billion for it, you should probably use it. Just kidding, but very useful for anyone who has family outside of the US because the rest of the uses WhatsApp for messaging.

Facebook Messenger – You can use stickers, make free calls, record voice messages and send free text messages. Messenger is a pretty useful app for keeping in touch with people. Also, it’s Facebook, so everyone you know in the world will be on it.

Snapchat – If you’re a teenager, then go ahead and download as you’ll probably want to share inappropriate pictures of yourself with other inappropriate teenagers. Good luck. 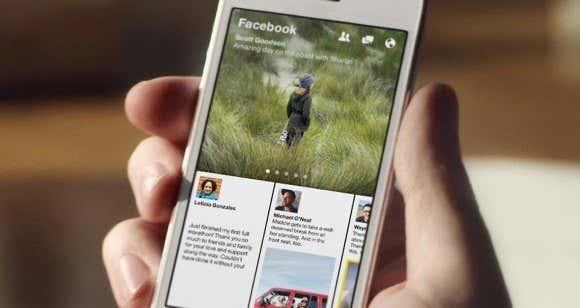 Facebook Paper – Paper is Facebook’s new app that lets you follow your News Feed in a much more modern looking UI. Everything looks better in the Paper app and it lets you follow popular news stories on a variety of topics.

Twitter – If you’re not on Twitter yet, you really should jump on the bandwagon. Even if you never post anything, you can get a lot of useful info by following the right people or companies on Twitter. Actually, I get better customer service from companies by posting on Twitter than by calling or emailing nowadays.

LinkedIn – Even if you work for yourself, you should have a profile on LinkedIn. It’s the best social networking site for professionals. Companies use LinkedIn like crazy for finding good talent, so keep tabs on your connections via the app.

Google+ – Google+ isn’t going to ever replace Facebook, but it’s a good complement. The posts on Google+ are more polished and newsy rather than photos of someone’s lunch or babies. 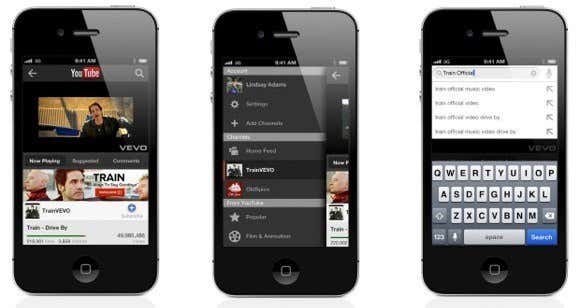 YouTube – It only has the most videos in one place in the entire world. Definitely have to download the YouTube app and catch up on whatever crazy viral video is floating around the web that day.

Netflix – If you have a Netflix subscription, then you’ll want the iPhone app so you can binge-watch Breaking Bad or House of Cards.

Amazon Instant Video – If you have an Amazon Prime membership, then you’ll want the Instant Video app to watch all that free content Amazon offers.

Vine – You can literally spend hours watching ridiculously short, yet hysterical videos on Vine. You can also create your own and post it! 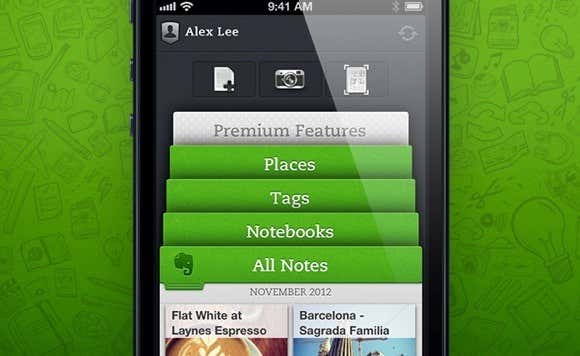 Evernote – This is the king of note-taking apps and has a slew of features. You pretty much can’t go wrong with Evernote. It works on all devices and there are plugins for browsers, applications, etc.

Microsoft OneNote – OneNote is Microsoft’s free note-taking app that I really like. It’s free on Mac and PC also, so your notes will be synced across computers, the web and your mobile device. 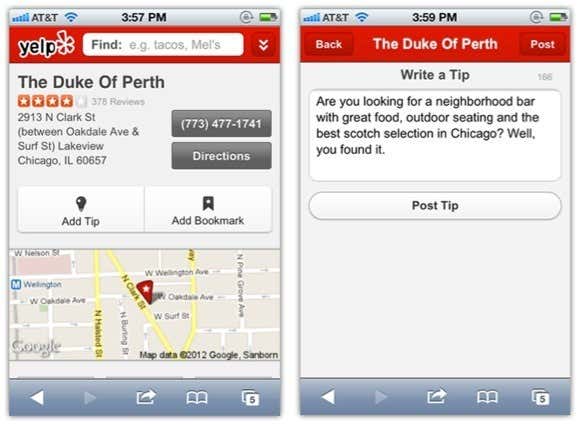 Yelp – You’ll always need good recommendations for places to eat, etc, so downloading one of the most popular local guide apps is smart. Yelp is integrated in Google search, Bing and lots of people leave reviews, which makes using it useful.

AroundMe – Another great app for quickly finding local businesses around you. While Yelp is more focused on food, AroundMe can help you find ATMs, hospitals, banks, bars and lots more. 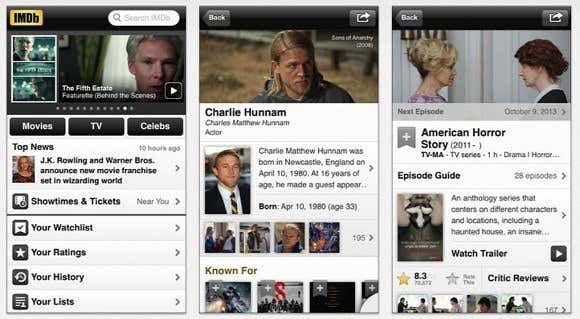 IMDB – Absolutely the best app for getting information about an actor, movie, TV show or anything related to movies and television. A must if you watch any TV or movies at all.

Fandango – Awesome app for getting local showtimes and watching movie trailers. Pretty much the same as Flixter, but I like this app better.

In addition to the above apps, there are some that don’t necessarily fit into one of the categories above. Here’s a couple of more that I find useful.

Chrome Browser – If you’re already a Google user, Chrome has some nice features to keep everything in sync. I also find it faster and better than Safari.

Google Search – Even if you never use this app to actually perform a search, you should use it for the Google Now notifications. If you’re a Gmail user, you can connect the two and get alerts automatically for flights, packages and more.

Skype – Facetime is awesome, but sometimes you need to video chat with someone who doesn’t have an Apple device. Skype is a great option since it’s already so popular.

Find My iPhone – You should definitely have this installed if you have more than one Apple device using the same iCloud account. It helps me keep track of all of my family members at any time.

Runkeeper – Runkeeper is the only fitness app I’m mentioning because it’s free and it does an amazing job of keeping track of your runs.

Obviously, this is a short list of best apps, but I wanted to keep the list small and to the point. I don’t like giving people 10 choices for every single category because then it’s hard to decide which one to download. What are some of your favorite free apps that you use daily or regularly? Let us know in the comments. Enjoy!

Use Summary Functions to Summarize Data in Excel