7 iPhone Apps to Write on Pictures

Admit it, it's fun to doodle with your finger

So yesterday I took a photo of my daughter that I thought was very funny, but I needed to add some text to the photo to really make it funny for other people. I started searching around for some good iPhone apps that I could use to add text to photos before I sent it off to family and friends. In addition, I wanted an app to create those photos with captions that people post to sites like Imgur all the time.

Now I buy iPhone and iPad apps all the time, so I don’t mind spending a buck or two for good apps. The list here will include free and paid apps, so for those of you who hate spending a dime on an app, you’ll have some choices too! Not all paid apps are worth it, but a lot of times the extra 99 cents adds a lot of value.

This is a cool app and probably my favorite. There is a free version that was all I needed for what I wanted to do. They also have a pro version for $1.99 that basically adds more frames, fonts, borders and effects. I didn’t care about all that fancy stuff, but mostly just wanted some nice text on the picture, so the free one is good.

The main features include the ability to add text to images quickly, change the text size, font and color, resize/rotate the text, add text effects, add emojis and stickers, and lots more. I really like this app because you can really customize the text. Some other apps let you add text, but you don’t get a lot of options. With this app, you can really go crazy. On top of that, they have a lot of cool frames and effects too, which I ended up using on the picture of my daughter.

Another cool app is FX Photo Studio, which costs $0.99. The advantage of this app over LiPix is that it has a lot of effects and filters, over 200 of them. On top of that, you can mix and customize each effect, so you have a lot more control. In addition, you don’t have to apply the effect to the entire image, you can paint an effect onto any part of an image, which is really neat.

Of course, you can add text and even though they don’t have as many fonts as LiPix, you still have quite a few choices that makes the text look really nice. The only downside to this app is that it has a lot of in-app purchases if you want to do things like use photo stickers or 3D effects.

TypeDrawing is $2, but it’s pretty awesome. It’s a typographic drawing app, which I didn’t even know existed until I found this little gem of an app. You can create some really artistic looking text on your photos using your finger and the various controls that are in the app.

They have a lot of controls and settings for managing color, outlines, shadows, symbols, text and lot of other stuff. You can really get creative with adding text to your photos using this app. This is the only app where you can create unique custom paths for your text.

This is another app that I like quite a bit. They also have a free and pro version, but the free one does a pretty good job. You can add thought bubbles, speech bubbles and text shapes to pictures and also create interesting photo collages, which is one of its unique features. You can also add smileys and clipart to your photos. 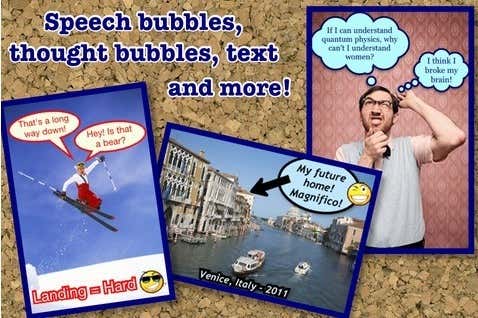 If you want to simply add plain text, you can do that too. It also has a nice interface and a lot of controls for color, rotation, effects, etc. The free version has ads and you have to spend money on in-app purchases to remove them. You can buy the Pro version, but it’s $4, which is pretty expensive for an app like this.

This is one app where you choose a caption from a bank and add it to your photos instead of writing your own. It’s basically a bunch of ridiculous and crude captions that you can add to your photos. I personally don’t use it much, but a lot of people I know like it, so I threw it into the list. 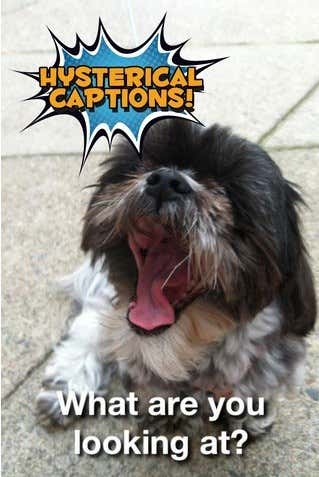 Of course, it’s nice that the app is free, so even if you don’t find a caption you like, you won’t be wasting any money.

This app is free, but has a $0.99 upgrade to the Pro version as an in-app purchase. This app is solely focused on adding text captions to pictures and it does a pretty good job. It has 25 pro fonts you can use, the ability to resize and rotate the text, different frame styles, and extra options like speech bubbles and adjustable shadows.

This is the last one I’m mentioning because in addition to allowing you to add text and bubbles to your pictures, you can create a complete comic strip with multiple pictures using this app.

It has over 1,000 stickers, 30 types of comic filters, 65 comic fonts and 11 different types of word balloons. The app is free to download, but the full version costs $4. This app is expensive, but you definitely feel like you’re getting a lot for the money.

Is there an iPhone app that you use to write on pictures that you like better than the ones I mentioned? If so, post a comment and let us know! Enjoy!

How to Check the RPM of Your Hard Drive?

What Is Android System WebView?