Reading: Setup a Second Wireless Router on Your Home Network
Back To Top

We moved into our new house about a year ago and I was super excited because I had it all wired up with Cat 6 cable and Ethernet ports all over the place!

Unfortunately for me, I didn’t realize that all of those connections would be coming from one location and that happened to be my master bedroom closet! Yes, when the AT&T guy came out to connect my Internet, he had to put the wireless router inside the wall of my closet.

This was not ideal by any means for several reasons:

1. Why would I want my wireless router stuffed into a wall in my closet? I can’t access it conveniently to reset it or check the lights, etc.

In this post, I am going to show you how you can add a second wireless router to the network that will be on a different subnet then the first router, but will still connect to the Internet using the main router as a gateway.

In a future post, I will also write up a tutorial on how to setup a second wireless router that is simply an extension of the main wireless router, meaning both would be using the same subnet and same range of IP addresses.

The first thing you’ll need is another wireless router. The reason why this tutorial will use two separate subnets is because it’s easier to configure the second router and you can buy any wireless router rather than having to find a specific router that will act as a wireless bridge or as a wireless repeater.

That’s also an option, but a lot of times you need two of the exact same routers or two routers from the same manufacturer, at least.

Without worrying about setting up bridges and repeaters, the configuration is much easier and we can use any wireless routers we want.

If you want both routers to work on the same subnet, you also have to worry about disabling DHCP on one router, etc. We can leave all the options to default using this dual-subnet method.

In my case, I went ahead and purchased a Netgear N600 Wireless Dual Band router. I’ve usually found that Netgear seems to work much better than LinkSys and D-Link routers, but it really doesn’t matter. 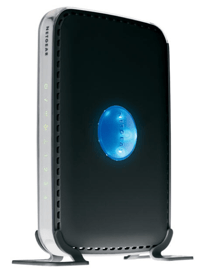 Now for the fun part! Remember that in order for this to work, you will need another Ethernet outlet somewhere in your house that you can physically connect your second your to.

The first thing you’ll want to do is unpack your router and plug it in. Once it is up and running, you should have an unsecured, but working wireless network in addition to our current wireless network.

At this point, we need to connect to the router and visit the configuration page in the web browser. Go ahead and connect to the wireless router on your PC or Mac. Read the instructions that come with the router.

It should tell you what the default IP address is and how to connect to the admin page using your web browser. Usually, it’s something like 10.0.0.1 or 192.168.1.254, etc. It should look something like this: 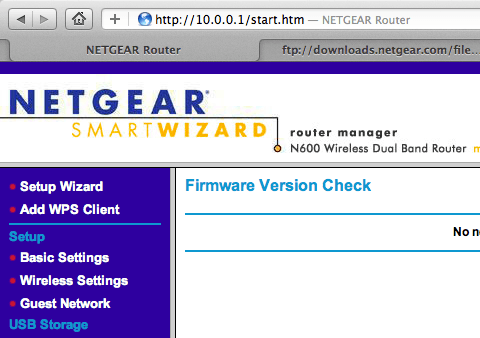 I’m assuming whoever is reading this has some technical knowledge and understands what I am talking about. If you need to change the IP address range for the router, go to LAN TCP/IP setup on the configuration page:

The IP Address is the IP address of the router, which in my case is 10.0.0.1. This worked out fine for me because my current wireless network was using a 192.168.1.x IP address, so there were no chances of conflict.

If you want to use a different IP address range, check out this post which lists the three main private IP ranges: http://en.wikipedia.org/wiki/Private_network.

Once you’ve confirmed the subnets are different, we can now configure the wireless router to use the first router (your main router that is connected to the Internet) as the default gateway and DNS server.

Of course, this really only makes sense if your house is wired with Ethernet ports around the house, otherwise having your first and second router right next to each other don’t make sense. Or if you don’t have any other choice, you can go buy a 100ft Ethernet cable and then connect the two together that way.

Again, if you don’t have jacks in your wall, you will have to connect a cable from a LAN port (the black ports in the above diagram) on the first router to the WAN port on the second router.

Once you have that physical connect, all we need to do is tell the new router to point to the first router for Internet access. You can do this by going to WAN setup in the router configuration for the second router.

Depending on which router you have, it may not be called that. Basically, you are looking for the section where you specify the Internet IP address. Normally, this is set to Get Automatically from ISP, but in our case we want the new router to point to the first router on our network.

Firstly, you need to give your second router an “Internet IP address”. This is different than the LAN IP address, which you saw above is 10.0.01 for my router. The Internet IP Address will simply be any available IP address on your first wireless network.

I randomly chose 192.168.1.145 because I knew there was no device on my first wireless network with that IP address. Just pick anything from 2 to 253, but preferably something higher like in the 100’s. If you are slightly technical, you can ping that address first to make sure there is no device that responds.

The important part is to change the Gateway IP Address and Primary DNS Server to the IP address of the first router, which in my case is 192.168.1.254. Basically, this is telling the second router to route all Internet traffic to the first router.

And that’s it! There’s really not much else to it. You should restart the second router once and try browsing the Internet once you connect a laptop to the new network. You may have to restart your first wireless network too in order to get everything to work.

If you are having trouble getting this to work, post a comment and I will try my best to help. Make sure to give details about your network and configuration, etc. Enjoy!

How to Check if Your VPN Connection is Actually Encrypted