Fix Delay When Typing in Windows

A few reasons why you may have this annoying problem

I recently ran into a very annoying problem while using Microsoft Word on my Windows machine.

Firstly, it’s a fairly fast machine and so I kind of knew it was not a hardware issue when I saw there was a delay between typing characters on the keyboard and the characters showing up on the screen. Sometimes there was no delay, but randomly the delay would jump to a second or even several seconds!

I was pretty sure it wasn’t related to the processing power of the machine because it’s a Core i5 laptop! After doing a lot of research, I finally managed to figure out what the issue was and now I don’t have any more lag between typing and characters showing up on the screen. However, depending on your system, you may or may not be able to fix the problem.

In this article, I’ll try to go through all the different reasons why you could be having this problem and how to solve it, if possible.

This is especially true if you type really fast, i.e. 40+ words a minute. If you didn’t have this problem before and now you’re having it all of a sudden, then it’s probably not the graphics card, so keep reading.

However, it’s still a good idea to download the latest driver for your graphics card just in case there is a fix that solves your problem. Most driver updates fix bugs or make things more efficient.

Even though this is rare, if you have a faulty memory module or a memory module that is not properly seated, then one of the manifestations of that could be delayed typing. If you know how to check your memory, it’s a good idea to take the chips out and put them back in one by one and see if that makes any difference.

You can also run a memory diagnostic on your computer using a free program called Memtest86. You can download it here:

The other main culprit is simply lack of system resources. It doesn’t matter how much memory or how fast your processor is, if all the RAM is being used and the CPU is running at 100% utilization, then you’ll see lag not only if typing, but also when doing normal computer activities.

On a Windows machine, go ahead and open task manager by pressing CTRL + SHIFT + ESC. 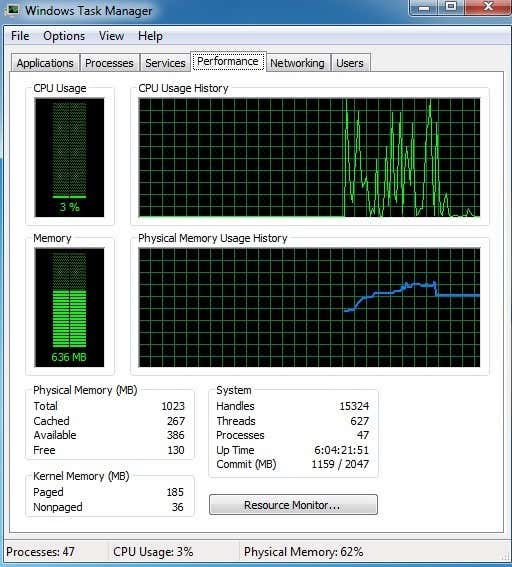 Go ahead and click on the Performance tab and you’ll see a few graphs for CPU Usage and Memory. Make sure the bars are not completely green, which means being completely utilized.

If you see your CPU usage is anything over 50% consistently, then you have to determine which program(s) are causing the spike and either remove them or disable them.

This can also be caused on systems that have a lot of malware installed or have a virus. If you suspect any type of computer infection, try to clean your system first.

Lastly, make sure you disable any CPU-intensive programs like anti-virus software. A lot of times anti-virus software can go crazy and start scanning everything under the sun and it can really slow the system down. If you have antivirus running, try disabling it and see if the delay in typing goes away.

If you find that there is no typing delay after a clean boot, then you know either a service or a startup program is causing the problem. You’ll have to follow the directions on how to enable items one by one to figure out what specific process or service is slowing down the system.

It’s a little time intensive, but it’s better than having to reinstall Windows.

If you have a computer from HP or Dell, it’s probably full of bloat-ware. It may be a good idea to simply perform a clean install of Windows if you have the time, patience and knowledge. You can go through and uninstall all that extra stuff too, but it usually ends up staying in your registry.

Both WiFi and LAN Enabled

It has also been confirmed that this issue can occur if you have both WiFi and LAN enabled on your Windows PC. Go ahead and disable one network connection, then restart and see if the issue goes away.

– Make sure you are not running out of hard disk space. If you are low on hard disk space, go ahead and use a program like CCleaner to delete temp files, etc. Uninstall some programs to free up space.

– Update all drivers on your computer. A few people have said updating their graphics card and other hardware drivers fixed the problem. If you are using a special keyboard of some sort, make sure you download the latest driver for that.

– If you’re using a laptop and getting the delay, try taking out the battery and see if the delay in typing goes away. Oddly, some people said taking the battery out fixed the issue.