The ugly truth is that all of them suck except one

If you’re reading this article, you came here looking for a way to “clean out” your Windows registry. Maybe someone told you that cleaning out the registry will fix computer performance issues or application crashes or something else that sounds really good. Unfortunately, many of these claims are false and could actually cause your computer more harm.

The Windows registry is basically a really big database with a bunch of keys and values that stores data about everything that makes Windows and the applications installed on it run. The registry starts off very large and can definitely grow in size over time as you install apps, uninstall apps, add/remove hardware, etc. 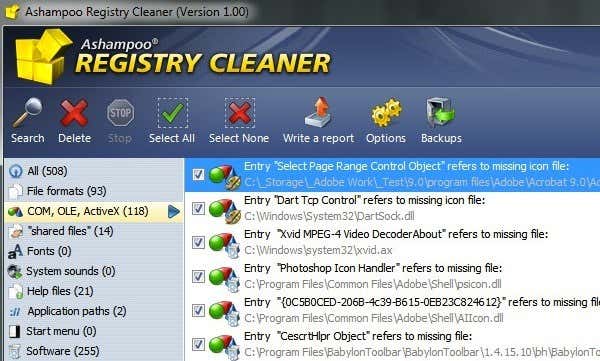 The reality is that registry cleaners were popular back in the days of Windows 95, Windows 98, Windows Me and maybe even Windows XP, but the newer operating systems like Windows 7, Windows 8 and Windows 10 are far more stable, well-coded and advanced than their previous counterparts. With Windows 8 and Windows 10, you can fix a lot of problems by resetting or refreshing your PC. You’re also going to see much bigger performance benefits by disabling useless startup programs in Windows or by uninstalling junkware or crapware from your system.

There are some rare cases where removing entries from the registry may help. One example that comes to mind is right-click context menu in Explorer. Sometimes the list of items becomes very large and some items in the registry no longer exist on the system. That means when you right-click on a file or folder, it could take a very long time to load the context menu.

In this type of case, removing the registry entries would help. However, it’s still a better idea not to use a registry cleaner. Instead, you would Google and hopefully find an article like mine that shows you how to troubleshoot a slow right-click context menu. This way you’re fixing the problem without clearing out a bunch of stuff you’re not sure what is being used for.

In addition, a lot of registry cleaners are simply malware or spyware programs that trick users into thinking they have serious problems with their computers when in reality they don’t. The programs will then pop up ads all over the place, steal important data and worse, so there is a bit of risk in using this type of software unless you stick with a reputable brand with a reputable website.

If you’re still certain that you need a registry cleaner, then I do have one recommendation. Before we get to that, however, you should always make a backup of the registry before you run any type of cleaner software. Making a backup is as simple as creating a new system restore point. I always do this before running any cleaner on my registry even though the one I will mention is extremely safe and has never caused me any issues.

CCleaner is actually a free system cleanup utility that happens to also include an option for cleaning the registry. I’ve already debated the worthiness of system cleaning software before and concluded that basically, yes, some tools do actually work in these cases.

The free version works great for most people, but if you end up using it a lot like me, I would highly recommend CCleaner Professional, which includes real-time monitoring, automatic updates and unlimited technical support for the one time price of $24.95. 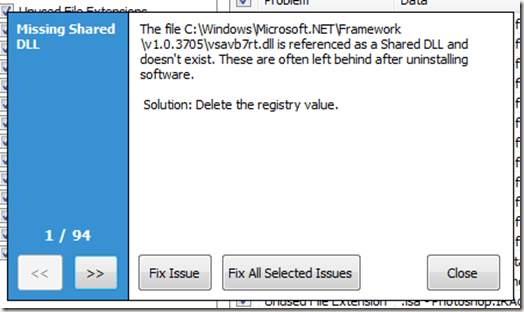 Most of the entries that CCleaner will remove are simply leftover keys that were not removed when a program was uninstalled. Again, these values do not actively make Windows any slower or prone to crashes. They simply exist in a database and aren’t accessed anymore. As mentioned earlier, these databases in the newer versions of Windows are advanced and therefore even tens of thousands of extra entries will not slow down access to the database.

What I like about this program is that it’s the best for cleaning your system in addition to having the registry cleaning option. It also allows you to create a backup of the registry before you fix any issues. It also lets you choose what types of items to scan the registry for, thereby allowing you to control the level of risk. The only downside is that it doesn’t really provide very meaningful descriptions of the actual entries, but that is true for every other registry cleaner too. There are simply too many entries in the registry to write descriptions of each.

At the end of the day, it’s the only program I can suggest that I am certain will not cause damage to your computer, install malware or do something else bad to your system. If you’re still having issues with your PC, check out some of the links I mentioned above that have a better chance of increasing performance and reducing crashes. If you have any questions, post a comment. Enjoy!

What Is a Vector Image & How To Make & View One

How to Endorse Someone on LinkedIn (and Get Endorsed)

Why Your Phone Drops Calls and How to Fix