Reading: How to Fix Window Media Player "Cannot Play This DVD" Error Message
Back To Top

Problem boils down to missing codecs

Isn’t it great how even in our modern computer age with Windows 7 and Windows 8, you can still receive an error like “Windows Media Player cannot play this DVD because there is problem with digital copy protection” when you’re trying to watch a regular from Netflix on your computer? It’s really a pain that something like that doesn’t just “work” considering it’s VERY COMMON for people to watch DVDs on their computers!

Anyway, this happened to me last night and it took me about 20 minutes to fix the problem, so I thought I would write up how I ended up fixing it! Hopefully, you read this before thinking it’s some problem with Windows or with your DVD drive, etc as I have seen some people re-install Windows or get a new DVD drive because of this error!

Actually, the problem all comes down to something called codecs. Codecs are small pieces of software that can decode the material on a DVD. Whenever a DVD is created, especially new one with copyright protection software installed on them, the content of the DVD is encoded using algorithms into a special format. This encoded data cannot be played on your computer in its normal format, so it has to be DECODED on your computer before it plays.

You may have heard of DivX, which is a codec that allows people to compress full-length DVDs onto a CD without losing much of its original image quality. Some software DVD players will auto-download the required codecs for you and hence you won’t have this problem, but for some reason Windows Media Players sucks at this and will pop up with the error message.

You can download all of the codecs for just about any type of video format by going to Free-Codecs.com and downloading the X Codec Pack or the K-Lite Codec Pack. You’ll see them both listed, one on the first page and the other on the second page. Simply ignore all the items that are grayed out as they are obsolete. 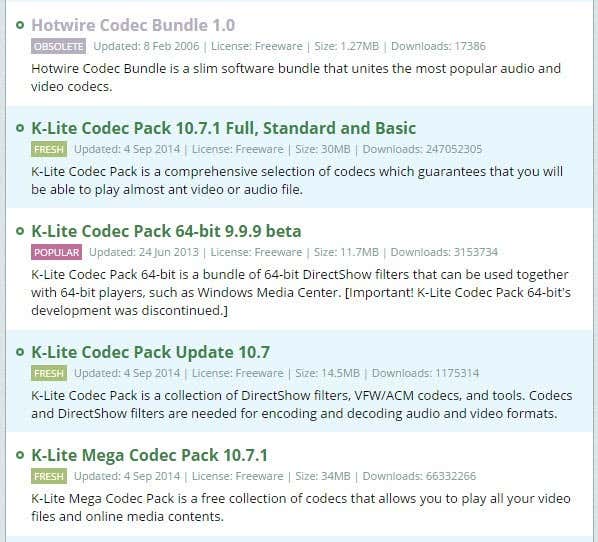 My suggestion would be to go ahead and install the K-Lite Codec Pack 10.x.x Full, Standard, and Basic package onto your system if you are running Windows 7 or Windows 8. This codec pack supports 64-bit also, so don’t worry about the K-Lite Code Pack 64-bit because development of that has been discontinued.

You could install X Codec Pack also for Windows 7 and Windows 8, but K-Lite seems to be the more popular choice with almost 247 million downloads! If you have enough space on your system, I would recommend installing the Full code pack rather than Standard or Basic. That way you can play any video file your throw at it and don’t have to worry about installing more codecs at a later point.

As for Blu-ray drives and discs, if Windows Media Player is not able to play the disc even with the codecs installed, you may have to try install something like VLC from VideoLAN. Actually, if you don’t mind installing VLC, it might be worth trying to play the disc using VLC first before installing a codec pack because VLC can play many formats without additional software. Also, make sure you have a drive that can read Blu-ray discs. Enjoy!

Change the Permissions of Chrome Extensions

How to See Who Has Unfollowed You on Twitter